What is Shot Blasting?

Shot blasting is a cost-effective and environmentally-friendly method for removing road markings or preparing asphalt, concrete and steel surfaces. This time saving process strips, cleans and profiles the surface leaving the it ready for chemical treatments, coatings and overlay materials.

Shot blasting can be used instead of thin asphalt overlays and broadcast systems to increase tire-skid resistance.

How Does Shot Blasting Work?

Shot blasting systems use a high-performance, rotating blast wheel, that propels steel shots at a high velocity toward the surface. The shot strikes the surface and rebounds, and the shot and debris are recovered into separator where the dirt and debris are separated from the shot.

The shot is recycled to the blast wheel repeatedly while the dirt and debris are transferred to the dust collector. This creates a steady blast of kinetic energy that strips coatings and surface contaminants while profiling the surface in one step. The dirt, dust and debris deposit in easy-to-handle bins, reducing exposure to workers and the environment. During operation, shot blasting is virtually dust-free.

Different ICRI concrete surface profiles can be obtained by varying the shot size and travel speed. Selecting the shot size is critical to proper performance—the larger the abrasive, the larger the impact power, resulting in a larger profile. The smaller the abrasive, the less impact power, resulting in a smaller profile. A surface preparation specialist can help you select the correct abrasive size for a particular project or application.

What Are The Benefits

Shot blasting does not require harsh chemicals or acids, and it does not necessitate containment.

When used properly, little to no dust is emitted into the atmosphere, and the process has a minimal carbon footprint.

Shot blasting is the only process that has been proven to restore both micro and macro texture to asphalt and concrete roadways. This translates into higher skid resistance and safer roadways.

To prepare concrete and asphalt surfaces for epoxy coatings, urethane coatings, MMA broadcast systems or polymer modified overlays, most manufacturers specify shot blasting as their preferred method of surface preparation. It produces a clean profiled substrate in one pass with no chemicals or water. No additional time is needed for the substrate to dry.

When To Shot Blast… 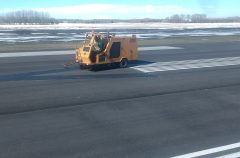 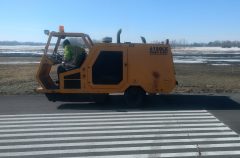 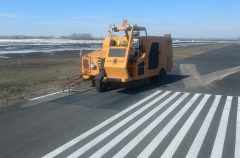 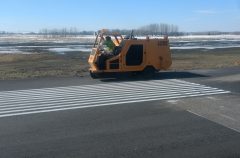